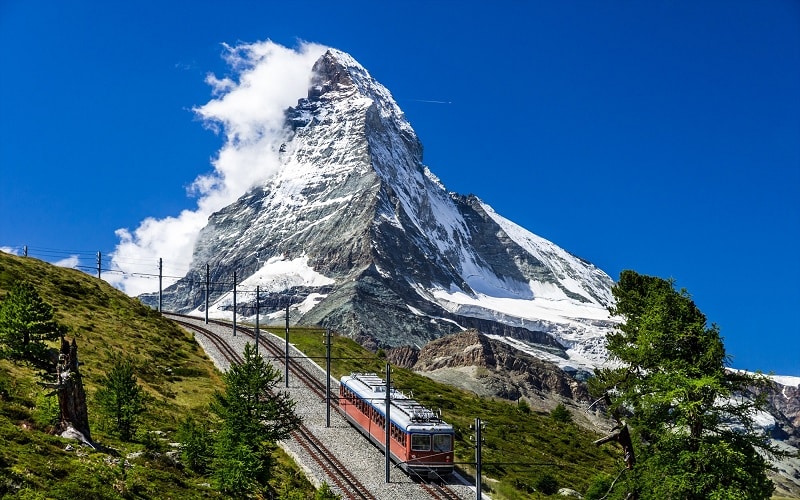 Top 10 places to visit in Switzerland

Whether you’re just visiting or moving to Switzerland, there are many top Swiss attractions. Visit these top 10 places in Switzerland to experience the best of Switzerland’s tourism.

Switzerland may be a small country but Switzerland’s tourism is anything but miniscule. Soaring Alps and glaciers dominate the top Swiss places to visit –  there are more than 200 peaks higher than 3,000m – alongside Switzerland’s bucolic countryside, ancient castles, clear turquoise lakes and breathtaking mountain peaks in every direction. The top Swiss foods make travelling around Switzerland a regional surprise, and once you learn the top Swiss fact, it’s easy to see this tiny country has a lot to offer.

The Jungfraujoch is an Alpine wonderland that has much to offer adventurers and those seeking a quieter retreat. The ‘big three’ – glacial monoliths Jungfrau, Monch, and Eiger – tower over rolling green meadows and winding mountain paths, making for truly enchanting views that embody the best of Switzerland tourism.

In its middle lies Interlaken, a rustic town that has become a popular starting point for travellers in the region. From there you can visit the Jungfrajoch’s highlights, such as the towns of Grindelwald, Murren, Wengen and Lauterbrunnen. Hike or take a scenic train trip to the peaks of Kleine Scheidegg, Grindelwald-First, Schynigge Platte or Schilthorn and treat yourself to panoramic views you won’t soon forget.

Hugged by Geneva on the west and Lausanne on the east is Lake Geneva, a giant liquid basin that has been aptly called by the Celts ‘Lem an’ or ‘Large Water’. It’s now referred to as Lac Léman by the French-speaking Swiss who reside in the area, and the 582 square kilometre-lake is dotted with luxurious fairy-tale chateaus on its shores and stretches of hillside vineyards rise from the lake, giving a rare glimpse into the world of Swiss wines. Ferries, paddle streamers and boats paddle through its topaz waters daily.

The lake is a great starting point to explore Canton Vaud’s wineries, Jura Mountains and Vaudoise Alps or the charming student city of Lausanne. Those seeking a more multicultural vibe can quickly hop to cosmopolitan Geneva, the centre of at least 200 international organisations and the United Nations. As the third biggest city in Switzerland, Geneva caters to a sophisticated crowd with elegant green spaces, enchanting museums and gourmet restaurants, yet maintains its grit with a lively alternative arts scene. One of the tallest fountains in the world, the Jet d’Eau, is Geneva’s postcard photo. Read about the prettiest Swiss towns within two hours of Geneva.

The Rhine Falls, Europe’s largest waterfall, is a bewitching natural wonder of Switzerland tourism. At the northernmost part of Switzerland near the town of Schaffhausen, the mighty falls roar from a breadth of more than 150 metres. Visitors can watch the spectacle from several viewing decks while those bold enough can rent their own canoes and travel to nearby castles Schloss Laufen and Schloss Wörth. On Swiss National Day, 1 August, the Rheinfall flaunts a senational firework display that attracts flocks of tourists.

As the cultural hub of Switzerland, Zurich is not one to cross of your list of top Swiss places to see. Unbeknown to many, behind Zurich’s metropolis, financial facade exists a pulsating nightlife with a contemporary edge. After all, Zurich hosts the Street Parade, one of Europe’s biggest annual rave parties.

While the city has kept some of its historical roots – evident in the emblematic guild houses, Grossmünster church, Swiss National Museum and Lindenhof square – regeneration is supreme in wealthy Zurich. Old heritage sites and factories have been repurposed and now serve as cultural spaces, joining more than 50 museums and 100 art galleries to see in Zurich. Known as one of the world’s most livable cities, Zurich offers everything you’d want for an urban escape, yet also the chance to reach rural, idyllic towns just a stone’s throw away. Read about the prettiest Swiss towns within two hours of Zurich.

In the heart of Switzerland lies the lakeside city of Lucerne, another postcard-perfect town nestled among a mountainous panorama. Fortified towers, wooden bridges and timeworn churches festooned with antique frescoes have allowed the city to keep its traditional townscape, adding to the charm of this top place in Switzerland. Take pleasure in the thrilling views of the city proper and Lake Lucerne by riding up to the peak of neighbouring Mt Pilatus, Mt Rigi or the Stanserhorn.

This pyramid shaped giant is arguably the most photographed mountain in the world and therefore, also Switzerland’s most famous Alpine peak and a top place to visit in Switzerland. The Matterhorn in Zermatt stands at 4,478 metres high and draws mountaineers from all corners of the globe eager to conquer its ascent – some even daring to reach its summit. Cable cars frequently zip through the mountain station in Zermatt, the highest cable car station in the Alps, and take skiiers and snowboarders to surrounding mountains during the winter and hikers in the summer.

Located in the heart of the Swiss Riviera on the banks of Lake Geneva is Chillon Castle – the four-century old water fortress that served as the seat of the wealthy Counts of Savoy. Stroll by the lakeside or parade through its ancient halls where 14th century paintings, towers, subterranean vaults, bedrooms, weaponry and furniture have been kept preserved in their original form. Chateau de Chillon consists of 25 building and three courtyards and is accessible by boat, bus or foot from the town of Montreux. This is one of the most visited historic buildings in Switzerland and certainly a top place to visit in Switzerland.

Switzerland’s only national park is a spectacle not to be overlooked. A throwback to how the Alps was before it was touched by tourism, the Schweizerischer Nationalpark features 172 square kilometres of unspoilt scenery from snow-encrusted glaciers, verdant pastures, waterfalls and lush woodlands, making it a top place to see in Switzerland. A total of 21 hiking routes crawl through the park, giving visitors a chance to glimpse its magnificent flora and, if luck is on your side, perhaps even sight the rare golden eagles, chamois, ibexes and marmots that call it home. The park is easily accesible from Zernez, S-chanf and Scuol.

Travelling to Lugano shows Switzerland in a different light. Bordering Italy in the south, the Italian influence is undeniable in the Ticino region, from the local language, romantic villas and rich cuisine up to the warm summers. Although a landlocked country, the weather in southern Switzerland is tinged by rushes of warm Mediterranean air. Lugano is flush with museums and a number of heritage sites housed in neoclassical palazzos (grand buildings). The city stands north of the gorgeous Lago di Lugano (Lake Lugano), an area frequented by celebrities which has been dubbed the ‘Monte Carlo of Switzerland’.

Not many people know that the medieval city of Bern is Switzerland’s capital – but once you step on its narrow cobblestoned streets, all doubts are sure to vanish. History sings in every corner of this top place to visit in Switzerland, especially in its Old Town, which has been named a UNESCO World Heritage Site. Archaic towers loom over Bern’s sandstone facades, numerous fountains and entrenchments while arcades are filled with boutiques, bars, cafes and cabaret stages that are sometimes hidden within vaulted cellars. As the current seat of the Swiss parliament (Bundeshaus), Bern is one of the most well-preserved historical centres in Switzerland. It boasts a stunning botanical garden, a colourful weekly market and access to the River Aare and the Bear Park, where a family of bears – the city’s symbol – reside.

Top 10 places to visit in the Netherlands

Cheapest places to fly in the spring of...